Images Taking over the Web with Updated Facebook App

Facebook is rolling out an update to its Facebook mobile app, this time jumping on the imagery bandwagon taking over the internet. With the strong recent success of Pinterest and Instagram, the internet has been abuzz as social media outlets try to take a piece of the success pie and place a higher emphasis on photographs.

Facebook’s recent purchase of Instagram and release of the Facebook Timeline demonstrated the company’s desire to be a part of the trend, and this new mobile app update does the same. The newly updated app will make photographs up to three times larger, taking up most of the screen. The new Facebook app update will take place on iOS (iPhone and iPod), Android, and Facebook’s WAP website. 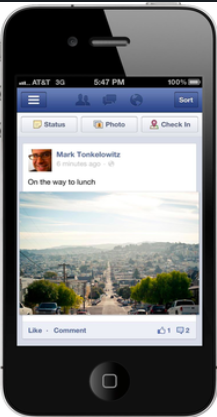 Users will not need to update their Facebook apps, as the change will be made on the server-side. Apps will automatically readjust to the new design as it is slowly rolled out to users.

My only wish? That Facebook actually created an app that wasn’t buggy. The app is already slow as it is- I can only image what the use of new, larger photos will do to the load time.

More to come as it rolls out to my app!