Another brand has jumped on the Pinterest bandwagon, and this time it’s Honda who takes the reins as the next big brand to use Pinterest as part of a marketing and advertising campaign.

In a land of SUV’s plowing through mud and driving up mountaintops, it comes as no surprise that Honda’s all-new CR-V is being marketed as a way to expore the world, get out, and live life.  Ironically, Honda is using Pinterest to get active “pinners” to do just that- get off of their computer and explore what the world has to offer.

On it’s Pinterest Page, Honda created several boards dedicated to the campaign, one of which hosts invitations to take part in Honda’s CR-V Pintermission campaign.

Within this #Pintermission Invites board, Honda created several images inviting an specific active Pinterest user to take a break from Pinterest- a Pintermission. The images were personalized to the user’s interests based on what they typically pin, and the invite offered the user to take a 24 hour break from Pinterset. By accepting the offer, the user would  receive $500 to go on an adventure of their choice.  Honda then tagged the selected Pinterest user on the image so that they would receive the invite. The example below shows an invitation that was sent to Jonathan Lo. Jonathan Lo has over 770,000 followers on Pinterest, and nearly 4,500 pins. He typically pins items of style, design, art, and fashion.

The invitation asks him to take the break from Pinterest to use $500 towards an exploration, and suggests him to take a trip out West or purchase some flannel, tweed, and ties. These suggestions were made based on his top shared pins, and the numbers of shares and likes can be seen at the bottom of each suggestion. 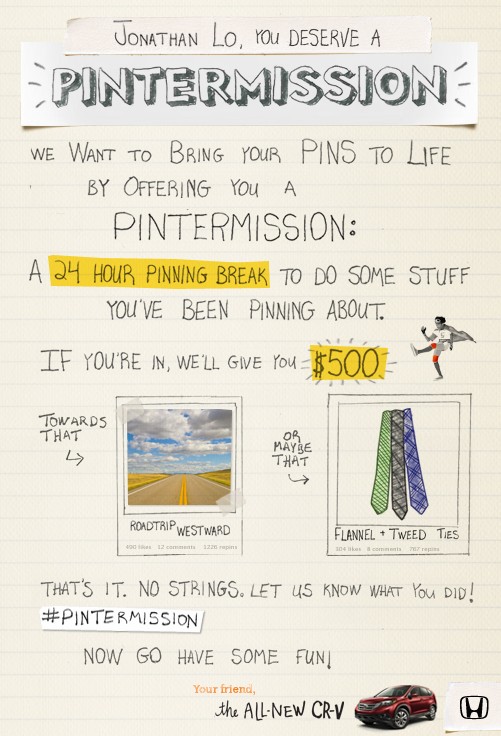 Jonathan Lo accepted the offer by Honda, and used the $500 towards a trip to Hawaii. During his trip, he took photographs of his explorations, and these were pinned on a special board dedicated to him on Honda’s Pinterest page. 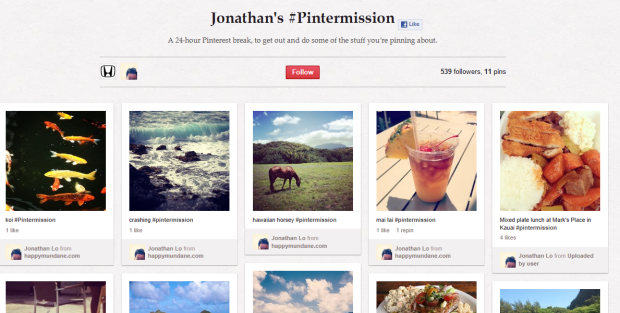 The Honda Pintermission contest is a great example of brands making the most of Pinterest. It’s great to see brands being challenged to come up with great out the box ideas on Pinterest. Unlike other social media sites like Facebook and Twitter, brands simply can’t reuse the same posts and tactics on Pinterest. On Pinterest, it’s about capturing user’s likes and interests, integrating with their lifestyles, and sharing inspirational content. Pushing out strictly promotional and brand-oriented content won’t work. Brands must integrate themselves with the photos being shared and the users sharing them.