Top Social Networks of 2012 via Nielsen

Nielsen has released their 2012 State of Social Media report. The report highlights a few interesting details about the top social networks and where we’re using social media.

The Social Networks we Use

Perhaps the biggest news from the study was that there are now four standout major social networks. Previously, the big three were considered Facebook, Twitter, and LinkedIn. Google+ and Tumblr were close behind, but there was never a clear winner between the two.

What happened? Think of what the social media world has been talking about all year. Despite barely even being a social network on the radar last year, Pinterest has not only made the list this year, but has taken over. Pinterest drove over 27 million unique PC visitors for the year, a 1,047% change from 2011. This is just under 1 million less uniques than LinkedIn. These numbers have made it clear that Pinterest can officially be considered part of the “big four” social networks. 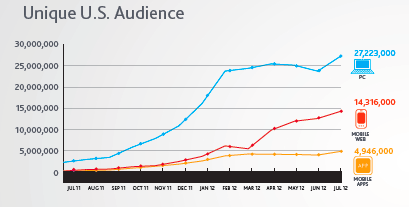 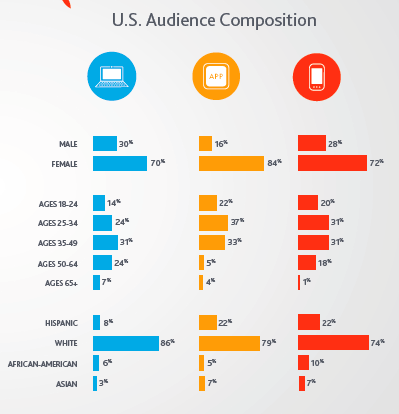 These statistics only support marketers such as myself who are Pinterest advocates. Think of Pinterest this way: even though users are primarily women, there is so much engagement with the site that it’s shot up to the fourth most visited social network this year. This fact alone should make marketers excited. Add on the fact that it is so reflective of an entire demographic and  brands should be thrilled. Think of all of the businesses whose target market is women 25-49. Most of these businesses, if done right, would likely succeed extremely well on Pinterest. I’m sure with additional research on male Pinterest users we’d have an even better idea of who these men are and what they like. From what I’ve seen, we can likely infer that these men are interested in style, architecture, traveling, and cooking. Businesses that fit into these categories and want to target males should be just as excited about Pinterest.

The Devices we Connect with

It comes as no surprise, but Nielsen has found that people are spending more and more time on the internet. The main reason for this is the increasing amount of smartphone owners with access to the internet in the palm of their hands 24/7. The overall unique audience using mobile apps increased 85%. On top of this, the number of minutes spent on mobile apps increased 120% from 2011.

These numbers are huge. But consider this: social media use accounts for 20% of a user’s time on PCs and 30% on mobile devices. Considering these are both such large chunks of consumers’ internet time and the fact that this internet time is skyrocketing as it is,   time on social media is exploding. Want to know where your consumers are? Social media. Want to know where you should be examining your marketing strategy? Social media.

Overall, the Nielsen study provides some interesting facts about where we’re at in social media. I’ll follow up with what Nielsen found about social media advertising.