This week I’m highlighting Taco Bell and the brand’s use of Twitter. On Friday I came across an article online highlighting why most businesses fail on social media, and that is being transparent. So many businesses see social media as simply a way to send one-way promotional messages, and this could be far from the truth. Social media is about creating a two-way conversation with your consumer and taking down that fence of communication between you and them. Many marketers (more so executives) are wary of doing this, nervous that they’ll make mistakes and communicate the wrong message. This is where the businesses fails in its social media efforts, and generates a negative feeling with consumers.

Taco Bell is a great example of a major brand using social media right. It’s use of Twitter is perfect with its young target audience.

Take a look at some of Taco Bell’s tweets. What do you notice? Do you see any pure promotional messages? 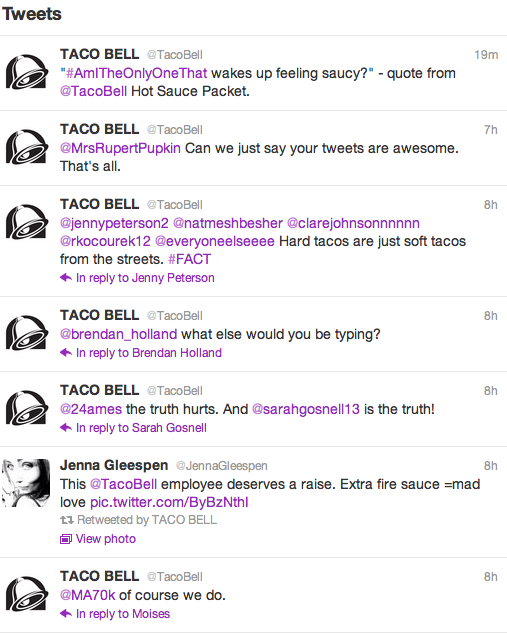 Taco Bell realizes that social media is just that- social. It interacts with its followers, replying and retweeting their tweets. Doing so increases consumer perceptions of the brand. Consumers don’t want a brand that is “cold” towards their  followers- they want one that includes them. Taco Bell does this. Though they do include promotional messages, they tailor them to their audience and offer interaction- asking questions, making jokes, and removing that barrier between them and their audience.

Businesses with different target audiences can do the same thing- this is not just something for the younger audience. Are you a financial business? Offer tips, reply to your follower’s questions, ask questions, get opinions, and include your consumers in financial news discussions.

I’d also like to add one other thing. Given the nature of Twitter, I think it is much more effective to use the tool internally than export it to an agency. An agency requires approval for tweets by you and results in delays and less flexibility. If you’re able to, hire someone internally to coordinate your Twitter and social media posts. It will allow you greater ability to respond to followers, and a better piece of mind knowing you’re in charge of what is being posted.